* For international readers of this blog (APW has readers in 77 countries), April Fool's Day is the first day of April.  It is a day when pranks and tricks are welcomed and encouraged.

I LOVE April Fool's Day.  Come on!  It's a day when I am allowed... nay, encouraged, to punk PilotHusband.  It's like my Christmas.  It is the BEST holiday out of the year.  I count down the days like a child waiting for Santa Claus.  It is the BEST HOLIDAY EVER!!!

In previous years, I have carried out some good pranks.  I switched out his house key for a different one, and left suitcases and trash bags on the porch to make him think I've finally had it and locked him out after packing up all of his stuff.  I've re-arranged all of the furniture and unscrewed all of the lightbulbs so when he comes home late at night, he falls over something in the dark.  I've coached a friend on how to sound like Crew Scheduling and had her call him for a trip, letting him get all the way to the airport before I confessed.  Good times.  But this year... I outdid myself.

PilotHusband takes off his shoes before he enters the house.  That's a good thing.  PilotHusband leaves said shoes, right in the threshold of the doorway.  That's a bad thing.  I have been complaining about tripping over his shoes for years.  Hence the inspiration for this year's prank.  Here's a "How To" in case you want to try this one next April Fool's Day.

Step One..... Be sure your PilotHusband has a trip over April Fool's Day.  Call his cell phone repeatedly when you know he is in the air and his phone is turned off.  Do not leave a message.

Step Two..... Do not answer the phone when he calls you back after landing.  Keep this up for as long as you can.

Step Three... Make a fake arm cast.  Take a white sock and cut off the toe end.  Make a slit 1 inch down from the cut end that is about 1 inch long.  Take a paper tube from a roll of paper towels and wrap it with newspaper, aluminum foil or plastic bags to increase the diameter to approximate your forearm.  Slide the sock over the tube and apply a strip of masking tape the length of the sock.  Cover the entire sock in white glue, Gesso, or decoupage paste.  Allow to dry.  Remove the strip of tape (this leaves an area free of glue so the sock cast will expand to slide onto your arm.  Have friends autograph it for you.

Step Four.... Just before your PilotHusband arrives home, put on the cast.  Lay on the sofa with your "broken arm" propped up with pillows.  Put on Lifetime Television for Women (the polar opposite of the Military Channel).

Step Five.... Have your child greet Daddy at the door.  Coach your child to say, "Daddy!  We told you not to leave your shoes in the doorway! Now Mommy has a bad boo-boo".

Step Six..... Let your PilotHusband find you wearing the cast.  Try to comfort him, that it really wasn't his fault that you broke your arm when you tripped on his shoes.

Step Seven.. Spend the next two days being utterly helpless.  Make him get up early to get the child ready for school, do the grocery shopping, walk the dog, change the kitty litter, take out the trash, cook dinner, and do the laundry (without dying everything pink).  Give yourself a mini-vacation.  Make him watch a marathon of The Real Housewives of Beverly Hills with you.  Make him watch every episode of Glee that you recorded.  Finally, make him cover your "cast" with a plastic bag and help you bathe.  Make him wash your hair and shave your legs.

Step Eight... On day three, remove the cast and carry on your normal activities.  When he looks confused just say "April Fool's!".  Then run.  Seriously.  Plan on staying with a friend until he leaves for another trip.  This may be slightly inconvenient, but sooooo worth it to watch him sift the cat's litter box! 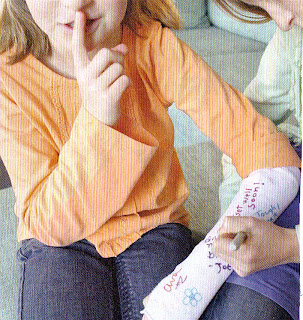 Hope your April Fool's Day was full of fun and mayhem!  Me?  I'm still hiding out at a friend's house!
Posted by angrypilotwife at 1:10 PM