Here in the Piedmont of North Carolina, we enjoy fairly mild winters.  But, every once in a while we get a winter storm that produces several inches of snow... and it completely shuts down all civilization!  We simply don't have the plows, salt trucks, or snow tires and chains, to function.  Inevitably, the Charlotte airport shuts down and the Pilots get to enjoy a snow day.

A few winters ago, we got an unusual accumulation of about 10 inches of beautiful white powder.  As flights cancelled, hotels filled, and Flight Operations became overwhelmed, we opened our doors to some stranded pilot buddies and I played airport shuttle driver with my 4 wheel drive vehicle.  We stoked the fire, opened the wine, and got out the extra sheets and blankets.

AngryPilotWife, Pilot Husband, CritterPilot Buddy, USAirPilot Buddy, CommuterPilot Buddy, and a Lufthansa Pilot (we'd just met that day in the terminal and took pity on) were joined in front of the fireplace by UPSPilot Buddy (who was NOT stranded... he just liked to show up frequently).  The day was quite cozy and pleasant until CritterPilot Buddy suggested it would be lots of fun to go sledding.

Lacking sleds, but not lacking a pretty good wine buzz, our group got resourceful.  We decided, in lieu of sleds, we would use the large inflatable tubes we towed behind our boat in the summer.  With tubes in hand, we set off to the GI-NORMOUS hill, just a few blocks from our home.  The first few runs down the hill were spectacular.  We giggled and whooped, and squealed like children.  But after several trips down the hill, the snow was compacted and pushed aside to reveal some jagged rocks to one side of the bottom third of the hill.  No worries! We just had to remember to steer ourselves to the left.

That's when it happened.  New LufthansaPilot Buddy forgot to steer.  His tube hit a rock, launching him skyward!  Fortunately, he landed on his behind. Unfortunately, he slid the remainder of the way down the hill on his butt, over jagged rocks and gravel.  The next two hours were spent by our usual group of Pilot Buddies, swapping war stories in front of the fireplace... while LufthansaPilot Buddy and I were in the bathroom.  You see it took that long for me to pick all of the bits of gravel out of the flesh of his backside with tweezers and dress the substantial wound.  When we emerged, LufthansaPilot Buddy raised his glass for a toast, saying "You know you have made a friend for life when they are kind enough to shave your ass before applying the bandage".  Words of wisdom, my friends... words of wisdom. 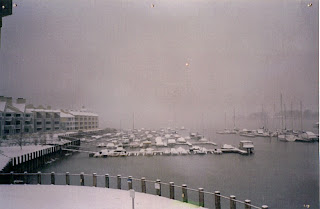 Posted by angrypilotwife at 2:22 PM