HE AINT AS GOOD AS HE ONCE WAS

Seniority is a beautiful thing, relative to your position within the Pilot group.  However seniority sucks, when looking at yourself in the mirror.  Here's how to tell if your PilotHusband is getting old.

You know your PilotHusband is getting old when...

Instead of condoms and after shave in his toiletry case, he now carries Lipitor, Antacids, and a Fiber supplement.


He thinks "The Situation" is when you have to fly with a Flight Attendant you used to date.

He can't name a single person in People Magazine.

The only cast member of Dancing With the Stars he can recognize is Gladys Knight... only after incorrectly guessing that she is Tina Turner.

He thinks Lady GaGa is a brand of baby clothes.

He thinks he looks cool while blasting Van Halen's Diver Down album (they're called cds now) in his car.

He is obsessed with plucking ear and nose hair, spending more time in front of the mirror than a teen aged girl.

His boobs are bigger than yours.

His waist measurement has exceeded his inseam.

He gets regular mailings from AARP (American Association of Retired Persons).

He still rocks a Member's Only jacket.

He lectures to anyone who will listen, that rap and techno music represent the end of civilization.

He thinks texting is a sign of the Apocalypse and thinks TTYL, OMG, and LMAO are company codes on the NY Stock Exchange.

He has to constantly be reassured (lied to) that the hair coming in on his head is "platinum blond", not grey.

He throws his back out when lifting his suitcase instead of when engaging in.... um... vigorous activity.

He thinks The Jersey Shore is what you follow when approaching JFK Airport from the south.

The last film he saw in a theater was Memphis Belle.

The only noises he makes in bed come out of his a$$. 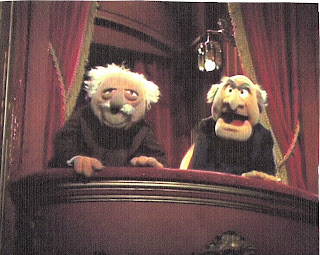 Old age is not for the faint of heart.  Be kind.  Be supportive.  To paraphrase Toby Keith, he aint as good as he once was, but he's good once as he ever was.

PS Happy Birthday to my PilotHusband.  You're not getting older... you're getting better.  Well, maybe not "better" per se... but you are getting more interesting!

Posted by angrypilotwife at 1:04 PM